When you book with an account, you will be able to track your payment status, track the confirmation and you can also rate the tour after you finished the tour.
Sign Up
1577

Visit the Ancient city of Split in Croatia and historic Mostar in Bosnia & Herzegovina, once a frontier town of the Ottoman Empire.

One of the perks of traveling to Croatia is that it’s easy to visit its neighbouring countries.

The city of Mostar is only a 2-3 hours’ drive away from Split.

Mostar (literally meaning “Bridge-town”) was once a frontier town of the Ottoman Empire.

It was named after the bridge keepers or “mostari” who guided the Old Bridge in the Middle Ages.

The city is situated in the Neretva river valley, surrounded by the Hum Hill and the Velež Mountain.

The UNESCO-protected Mostar Old town with the Old Bridge is unique for its architectural diversity.

Stroll the Old Town’s cobbled streets, cross the historic bridge, visit the Mosque or relax in one of Mostar’s cafés.

Soon enough, you’ll feel transported to some other time, lulled in tranquillity of this slow-paced, relaxed historic city.

From Mostar, head to Croatia and the popular city of Split.

Split is the second largest city in Croatia and one of the oldest settlements in the Adriatic.

The Ancient Palace in its centre, built by the Roman Emperor Diocletian, is a real masterpiece of Ancient architecture and a top place to visit.

Relatively easy to get around, this town makes a perfect destination for your city break throughout the whole year.

Although a vibrant city, Split has many nice beaches you can relax on and is close to islands of Hvar and Brač, perfect for a day trip with family or friends. 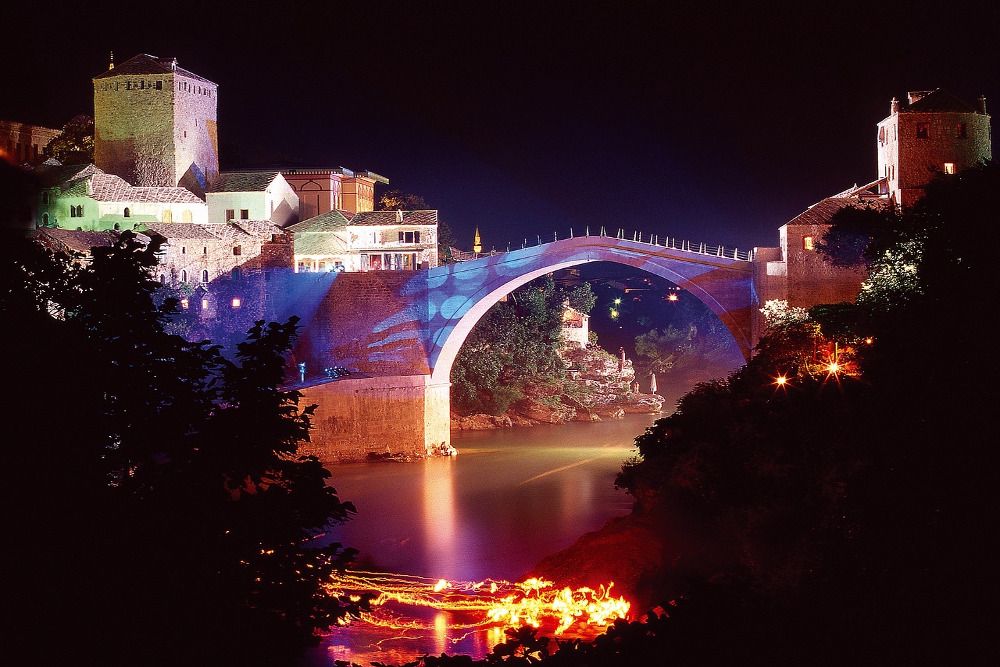 We’ll pick you up from the airport and transfer you to the hotel in Mostar city centre.

After breakfast, we’ll organise a guided tour of Mostar for you.

Your guide will pick you up from your hotel or meet you in the city centre.

On your way, you’ll walk the historic UNESCO-protected Old Bridge, visit the Mostar Old Town, learn about this city’s complicated history and the deep-rooted divisions between its Catholic and Muslim communities.

After the tour, stroll the streets of Mostar, walk down the Neretva river or try local specialities in one of the restaurants in the Old Town.

After breakfast, we suggest a day trip to Kravica Waterfalls, only a short ride away from Mostar.

The waterfalls are situated in the Karstic heartland of Bosnia & Herzegovina on the Trebižet river.

This is a popular swimming and picnic destination with many restaurants and cafés offering grilled dishes and local specialities.

After breakfast, check out of your hotel.

We’ll pick you up and transfer you to your hotel in Split.

Overnight at the hotel in Split.

After breakfast, join us on a guided tour of Split’s historic centre.

This Ancient city was built around the Ancient Roman Palace built by the Emperor Diocletian in the beginning of 4th century AD.

In 1979, this magnificent historic complex was included on the UNESCO list of World Heritage Sites.

Today you’ll visit Split’s most interesting landmarks: the Diocletian’s Palace, Prokurative, the Temple of Jupiter, the Croatian National Theatre and so on.

Free afternoon to explore Split or grab a lunch in one of its restaurants.

Overnight at the hotel in Split.

After breakfast, we’ll suggest an excursion to the Hvar Island.

Hvar is today one of the most popular summer destinations in Croatia.

This chic island boasts narrow cobble stoned streets, magnificent St Stephen’s Cathedral and one of the biggest public squares in the Adriatic.

Hvar Town is also a home to the oldest public theatre in Europe.

Upon arrival, you’ll be taken on a guided tour of Hvar Island, learning more about this beautiful town’s history and heritage, visiting the Cathedral, the Franciscan Monastery, the Hvar Theatre, the main square and the beautiful promenade lined with palm trees and luxurious restaurants.

Return to the hotel in Split & overnight.

Our driver will pick you up from your hotel in Split and transfer you to Split Airport for your flight home or to another hotel for a remainder of your stay.

From897
7 nights/8 days
Visit ancient Split in Croatia and travel to the popular Island of Hvar, famous for its historic Old Town and fine restaurants & beaches.
10 travellers are considering this tour right now!
Quick Quote