When it comes to must-see places in Croatia, the Plitvice Lakes should definitely be on your list. Consisting of sixteen lakes, this tourist attraction is one of the most beautiful and popular national parks Croatia has to offer. The Plitvice Lakes are on the UNESCO list of protected natural heritage sites and have been since 1979.

According to legend, the Plitvice Lakes were created after a long drought. People were praying for water for months, years, decades, but nothing helped. Their children and animals were dying and their land lost its fertility.

Then, the one person people counted on the least, came to their aid – the infamous Black Queen. Her seat of power was the Medvednica castle during the Middle Ages, situated above today’s city of Zagreb, and was known for her malicious nature and black magic… on this occasion, the Black Queen decided to help her people.

She arrived among them, followed by her many guards, and caused thunder and heavy rains using her magic. It was raining for a very long time, long enough for the water to create the Plitvice Lakes. 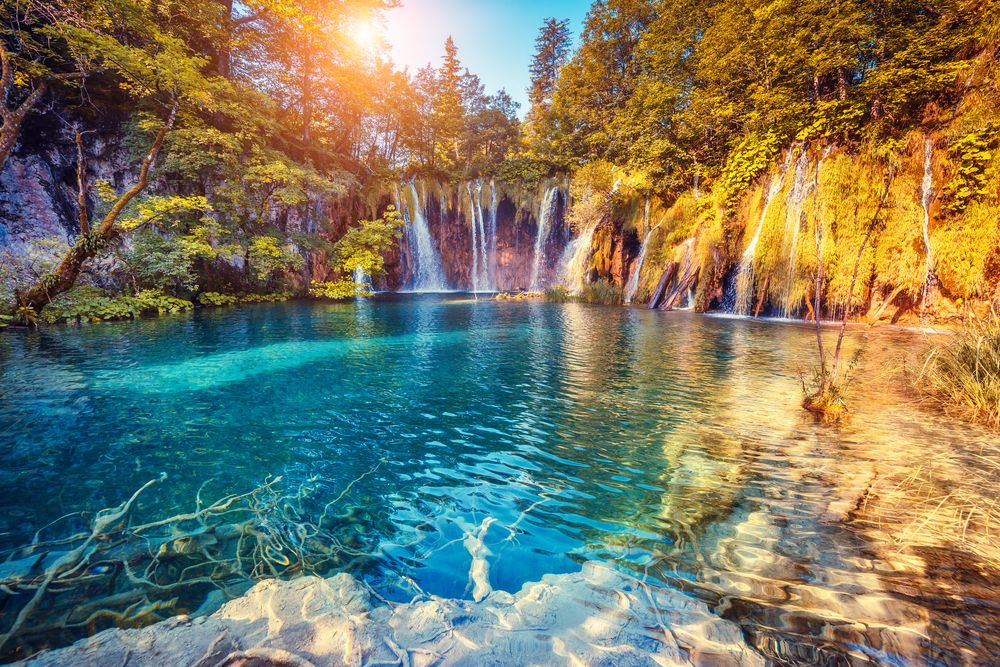 Literally translated from Croatian, Plitvice is a word derived from the term for “shallow waters”. It was first mentioned in a document from the late 18th century.

The lakes are situated right in between the Adriatic coast and the Dinara mountain, the natural border between Croatia and Bosnia and Herzegovina.

The Plitvice territory has been inhabited since prehistoric times by various peoples such as the Celts, Ilyrians, Japodes and Avarians, as well as Romans, Turks and Slavs, which remained here and established the Croatian state in the Middle Ages.

Thus, the Plitvice territory is actually a very precious archaeological site; it lies on the remnants of prehistoric settlements established by the tribe of Japods and the later Roman settlements as well. 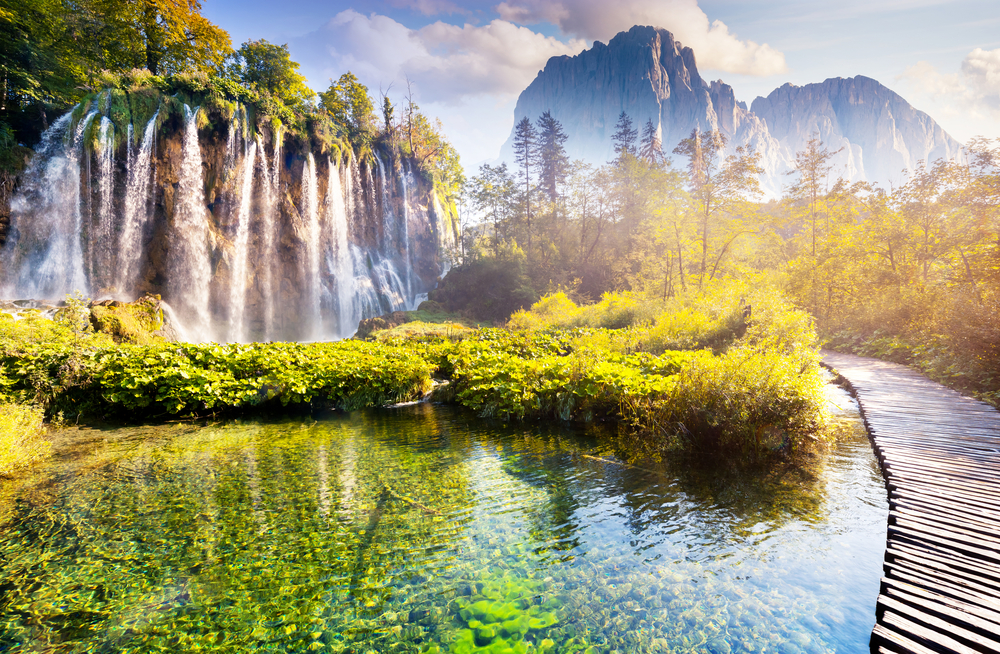 This area has witnessed the rise of Napoleon in the early 19th century as he, for a short period, ruled the parts of Croatia named the Ilyrian provinces. The Plitvice Lakes were thus the part of his territory as well, but the Habsburgs returned them, along with the rest of Croatian territory, right after Napoleon’s defeat by an army in 1813.

The Plitvice Lakes were established as a tourist destination towards the end of the 19th century. In 1894, the Lakes had, for the first time, received a thousand visitors per year. Over a hundred years later, in 2011, the Plitvice Lakes counted a million visitors. So, apart from its rich history and charming legends, what is it that attracts millions of tourists? 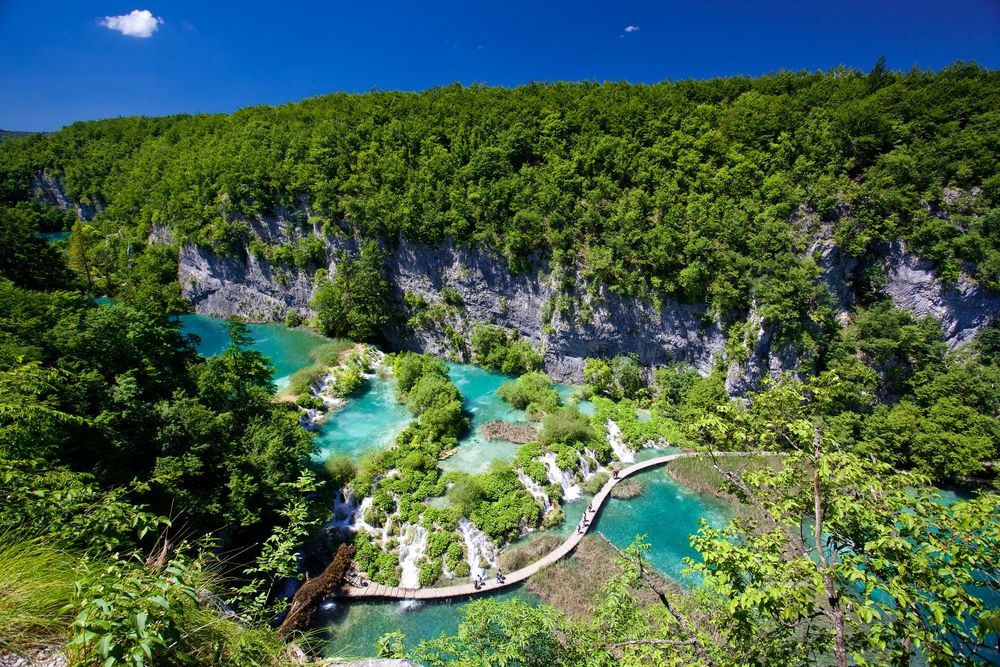 Once you arrive, you’ll be hooked by the beauty of stunning green and blue lakes and many waterfalls. The lakes look as wonderful on warm sunny days, as they do during the dark winter months, covered by layers of snow and ice.

The Plitvice Lakes consist of sixteen interlinked lakes often called the sixteen silver stairs. Wondering through the lakes literally feels like going up and down these watery stairs. The biggest among them are called Kozjak and Prošćansko lakes.

The lakes are surrounded by forests, which have been proclaimed a protected area since the 19th century. These forests are home to various animal species, among which is the brown bear, known as the bear of Lika. Lika being the Croatian region where Plitvice are situated. You can find this animal on the back side of the 5 Kuna coin, which is the currency of Croatia.

If you are, however, looking for a more practical reason to visit the Plitvice Lakes, the national park is situated right in between the Adriatic coast and the capital of Zagreb; it’s easy to use and quite hard to bypass. All paths lead to Plitvice!

This is a perfect one day escape from the busy Zagreb streets or crowded Dalmatian beaches. However, visit for longer if you want to – book a hotel right next to or in the Park and enjoy the nature in one of the most popular tourist destinations in the Balkans!

The Black Queen won’t harm you; she enjoys the Lakes herself ever since the Middle Ages.

From947
6 nights/7 days
Join this grand tour of the Western Balkans, visit magnificent UNESCO-protected sites in Croatia and Slovenia.
SELLING OUT FAST! DON'T MISS OUT!

From397
3 nights/4 days
Zadar is a vibrant city on the Croatian coast. Why not combine it with the Plitvice Lakes National Park? This city offers amazing nightlife & sunny beaches!

From1,947
10 nights/11 days
Join us on this 11-day Croatia island hopping tour from Zagreb to Dubrovnik, including the Plitvice Lakes, Hvar and Split!

From1,347
10 nights/11 days
This tour offers the best of two cities – Zadar and Dubrovnik – with some time to relax on the beach in the Makarska Riviera
0Shares
PrevNext