Tour Croatia > Croatia > The Wonders Of Zagreb: A Fantastic Day In Croatian Capital

Even though I spent five years of my life in Zagreb, it seems one can never get tired of this tiny capital city. So here I go again – writing about Zagreb and its most beautiful sights, hoping to inspire fellow travellers to choose it as their next destination.

Croats write songs and poems about Zagreb, to try and express their love for the city. One of them calls it “the most beautiful city”, another describes the streets and roads of the historic Old Town, and where is best to take your better half for an evening stroll.

Like the authors of these songs and poems, I am still very much charmed with my former hometown. It seems the “honeymoon phase” has never really ended for me, as I always find something new about Zagreb to be in love with.

That said, I feel I should start by taking you to my favourite place in Zagreb Upper Town, where I first fell in love with this city.

Let’s suppose you’ve booked a city break to Zagreb and this is your first day. Having just left the tram, you’re standing at the Zagreb Main Square. Preferably you’re travelling in autumn or spring, when it’s not too hot or too cold – my favourite time to visit Zagreb is in September.

University students prepare for the forthcoming semester and juniors are back to school, holidays are over and everybody’s back in the city.

So, let’s assume it’s September. It’s still warm, practically summer, so you don’t need a coat or even a light jacket with you. On the right side from you, there’s a large clock (if you look carefully, you’ll notice nervous boys waiting for their dates to arrive).

Dominating the square is the massive statue of a man on a horse. This is the famous Ban (Duke) Jelačić, the Croatian hero from the 19th century. 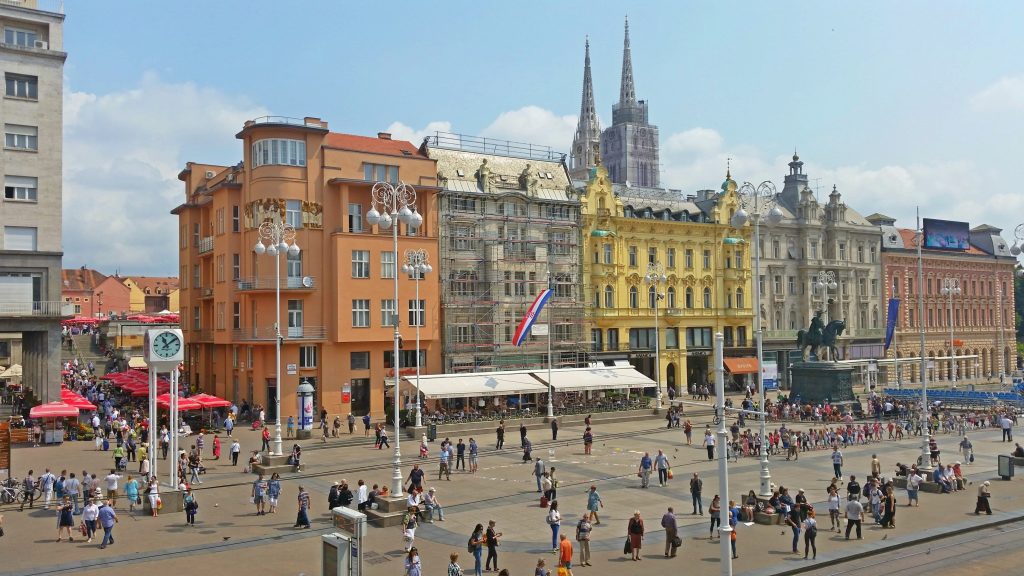 Zagreb Main Square, one of the city’s most iconic sights

Explore The Sights Of The Historic Upper Town

On your left, you can see a narrow street leading up somewhere. It’s cobbled stoned and looks older than the square you’re standing at. Walk towards that street and on your left side, just a few meters in, you’ll see a sign showing a narrow path. This leads to the Upper Town and the most beautiful view in Zagreb (if you ask me!).

Taking these stairs is a challenge, as there are many of them, but you’ll be glad once you’ve done it! The first thing you see is the two white towers of Zagreb Cathedral. On your left is a path leading to the funicular and the beautiful viewing point next to it.

There is also a stone bench with a statue of a man sitting on it. It took me a while but I finally discovered some time ago this is the statue of the famous Croatian poet, Antun Gustav Matoš. His poems are very pretty but somehow melancholic – so no wonder he’s still sitting here, alone with his thoughts and the most beautiful view of Zagreb in front of him. 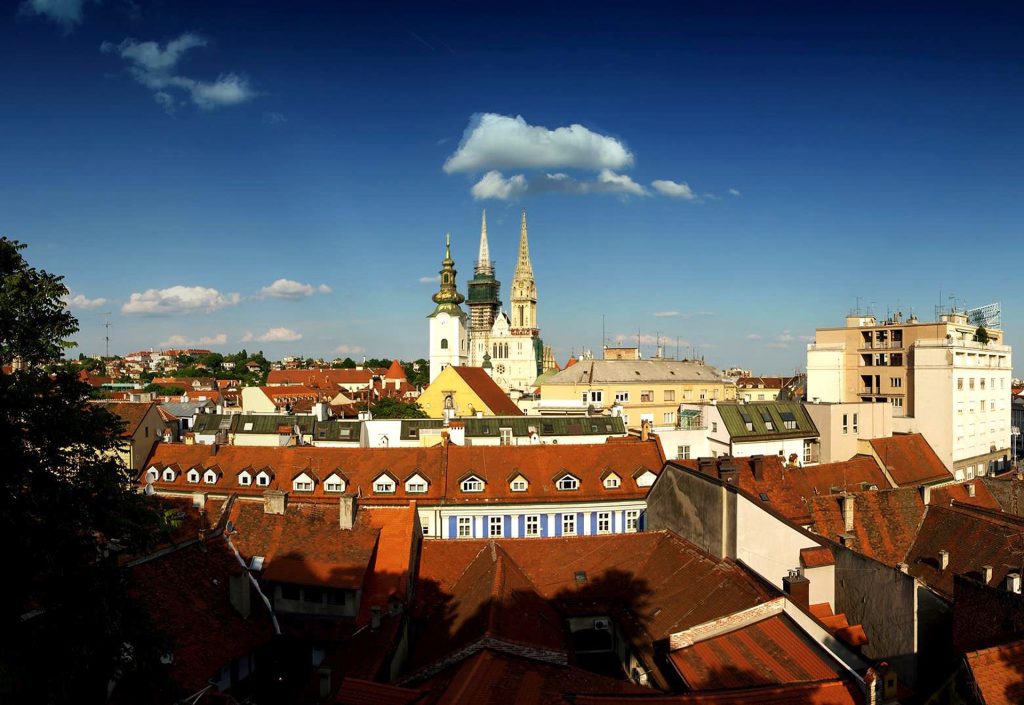 View over Zagreb from the Upper Town

Countless red and brown roofs are in front of you, with tall buildings and a few skyscrapers in the distance. Behind you is the 13th-century Lotrščak Tower, one of the old entrances to the Medieval town of Gradec.

Later on, Gradec merged with Kaptol, a town established on a neighbouring hill, into Zagreb. With its robust walls and small windows, one almost expects Rapunzel to arrive and let her hair down.

Today, Lotrščak Tower is famous for a rather loud event – every day at noon the cannon is fired from Lotrščak Tower as part of the city’s tradition. You might want to be somewhere around the Upper Town to hear this!

Grab Something To Eat In Tkalčićeva Street 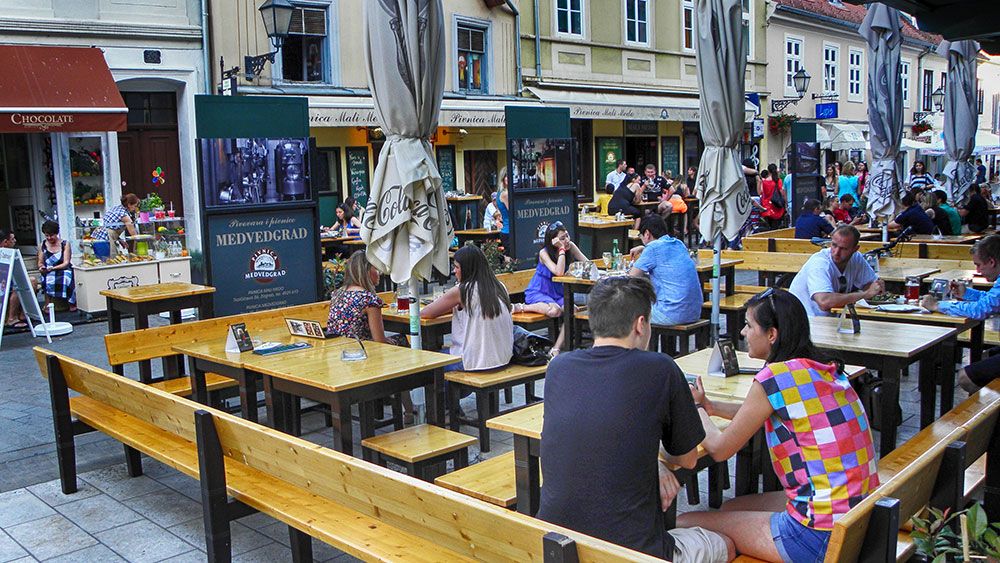 At this point, you might feel it’s time for lunch, so take a few last pictures and go back the same way you came. You’re standing in that narrow cobble stoned street again. Walk a little bit up and on your right you’ll see a short path leading to a parallel street.

This path is called “Krvavi Most” (“Bloody Bridge”), its name being a remainder of an actual wooden bridge over the Medveščak creek that, obviously, no longer exists. The name stayed nevertheless, and it’s named “bloody” as a reminder of many battles that used to take place between the belligerent citizens of Medieval towns of Kaptol and Gradec.

Go through the Krvavi Most street and you’ll arrive in the most colourful street in Zagreb – the Tkalčićeva street. By colourful I do not only mean the pretty colours of the buildings but the variety of little cafes, restaurants and bars that can be found here.

In this street, you’ll find a charming restaurant called “Nocturno”. Situated in yet another narrow street connecting the Tkalčićeva street and the Dolac Market, this place provides a wonderful view over Zagreb Cathedral and is almost always full. With a huge menu and affordable prices, this is my favourite place to eat in Zagreb.

Your next stop is a special place I’ve kept for the end – the Zagreb Botanical Garden. Head towards the Main Square and take the tram number 6 or walk there. It should take you about 20 minutes by foot to reach the Garden.

On your way, you’ll pass the beautiful Zrinjevac Park and the King Tomislav Square with a pretty yellow building of the Zagreb Art Pavillon and a large park in front of it. 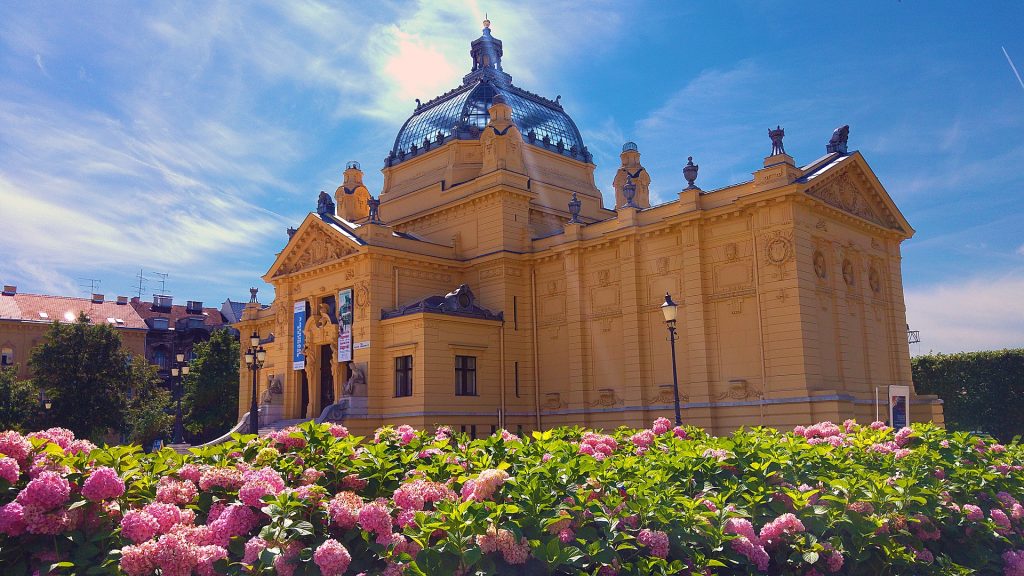 The entrance to Botanical Garden is free of charge. This charming place was founded in the late 19th century and is part of the Faculty of Natural Sciences in Zagreb. Students take care of it most of the time.

Here you’ll see all sorts of plants, walk around a small fountain and a lake, but most of all, you should come here to enjoy the beauty and serenity. This is a wonderful green oasis in the centre of busy Zagreb, minutes away from the Main Train Station.

By the end of this day, I assure you you’ll be as convinced as I am – Zagreb is indeed the most beautiful city!

From1,397
9 nights/10 days
This fantastic island hopping sailing tour of Croatia takes you to Croatia's most beautiful cities and islands.
SELLING OUT FAST! DON'T MISS OUT!

From1,547
10 nights/11 days
Visit Dubrovnik, Split, Istria and the capital city of Zagreb on this exciting 10-night holiday!
0Shares
PrevNext